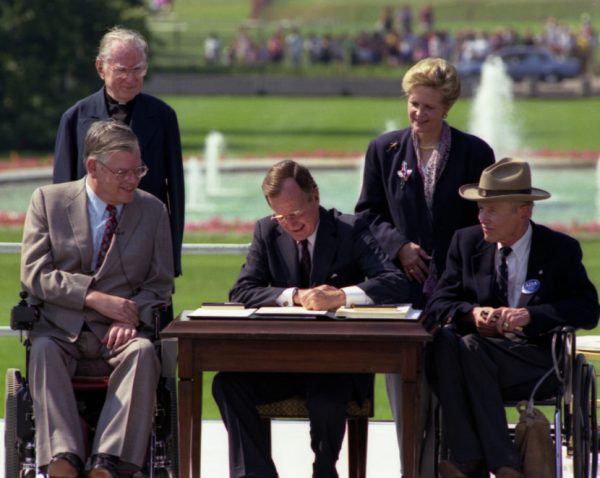 President Bush signs the Americans with Disabilities Act on the South Lawn of the White House. (Courtesy photo of George Bush Presidential Library and Museum)

It was 31 years ago that the Americans with Disabilities Act was signed, and today housing for people with cognitive and physical disabilities is part of everyday life. To mark the anniversary of ADA, July is the month of Disability Pride – a time to celebrate progress and raise awareness. We spoke to members of the Governors Council on Disabilities and Special Education about the virtual celebration and the work ahead.

Send an email to talk@alaskapublic.org (Comments can be read on the air).

Post your comment on social media during or after the live broadcast (comments can be read on-air).

Lori Townsend is the news director for Alaska Public Media. She has been working in print and broadcast journalism for almost 30 years. Radio took her to Alaska, where she worked as a broadcast trainer for local fellows at Koahnic Broadcasting before joining APRN in 2003 as a reporter / presenter. APRN merged with Alaska Public Media a year later. Through her freelance work, she has produced national and international news and feature stories for Independent Native News, National Native News, NPR, Pacifica, Monitor Radio, Radio Netherlands and AIROS. Townsend has received numerous awards for her work from the Alaska Press Club, the Native American Journalists Association, and gold and silver reels from the National Federation of Community Broadcasters.

Standards for involuntarily committing sufferers in Maine is about…

Bettering job alternatives for individuals with a disability

Legislature begins with about 40 new members