The National Disability Insurance Scheme has been a cash splash for big players in the sector, and few have benefited quite like the Australian Foundation for Disability – otherwise known as Afford.

Since the launch of the NDIS in 2013, Afford has more than doubled its clients to more than 4,000 and increased its annual revenue from less than $50 million in 2015 to almost $120 million last financial year.

But beneath the glossy corporate veneer there is trouble at this western Sydney-based charity.

ABC Investigations has discovered Afford’s phenomenal growth has been accompanied by serious concerns from some staff and families about client safety, lavish spending by executives on alcohol and entertainment, and a creeping corporate culture that critics say puts profit before everything else.

We have obtained financial records showing one manager spent thousands of dollars on a corporate credit card at bars and pubs last year, including $1,500 in a single night at a Gold Coast nightclub.

Last month, a group of Afford staff enjoyed a luxury Sydney Harbour cruise on board the superyacht Seven Star, which according to its website costs at least $2,250 per hour to rent – plus catering.

Some disability sector figures, like Autism Awareness Australia’s chief executive Nicole Rogerson, see Afford’s problems as a cautionary tale for other big charities now bulging with cash from the NDIS.

“We’ve seen a massive upswing and the corporatisation of the NDIS, and now we have service providers getting bigger and bigger and wanting to provide services to people with a disability and make a buck,” she said.

Tanya Petrus, whose daughter, Merna Aprem, died while in the care of an Afford group home in 2019, shares those concerns.

“It’s all about the money,” she said. 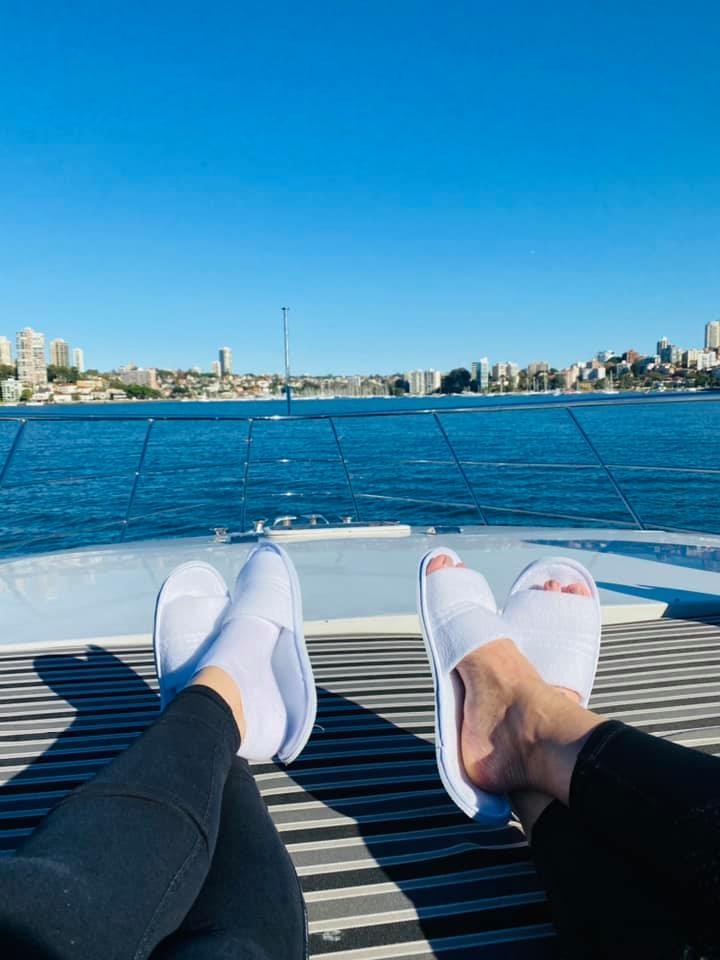 Afford senior managers were treated to brilliant blue skies for their recent cruise on Sydney Harbour.(

The ABC can reveal Afford’s board has commissioned an external investigation into allegations managers misused the organisation’s funds and that several staff members were given promotions that did not fit their experience or skills.

Afford declined a request for an interview, but in a statement said the investigation was ongoing.

“Afford is aware of certain allegations made about the company’s management and has taken them very seriously,” it said.

“We remain absolutely focused on ensuring the ongoing efficient and effective operation of all our services.”

The ABC is aware of at least two other investigations into management issues at Afford over the past few years.

“Any internal investigations are a confidential matter for Afford,” it said.

Afford clients and their families want proof that the organisation has made serious changes to the way it operates.

Tanya Petrus says she is yet to receive an apology from Afford over the death of her 20-year-old daughter at an Afford group home in western Sydney in June 2019.

“They cannot make this right by me,” Ms Petrus said.

“I will never, ever forgive them.” Tanya Petrus believed her daughter Merna would be safe in Afford’s care.(

Merna Aprem, who had autism and epilepsy, drowned after having a seizure in a bath behind an internally locking door.

ABC Investigations has obtained the report of an external investigation into Ms Aprem’s death, which found several contributing factors, including that clients at the house “were able to lock themselves in the bathroom with staff unable to unlock the door in the case of emergency”.

Among the most concerning in the report was that Merna’s medical records were not held on Afford’s digital client management system. Merna Aprem died in a group home run by Afford in western Sydney two years ago.(

That meant staff on shift on the night of Merna’s death may have been unable to view her epilepsy management plan, which made clear that she had to be supervised by a support worker in the shower or bath.

The investigation also found what it described as a “box ticking” approach to compliance, and spoke to staff who noted Afford’s rapid growth and the significant demands placed on staff.

One staff member told the investigators they believed “the growth in the number of clients hasn’t matched the growth in infrastructure to provide quality services to those clients”.

Afford said the investigation overall found the organisation had strong process and procedures in place, and did not apportion blame to any individual or event.

“The report recommended a number of corrective actions be taken to reduce the likelihood of a similar incident being repeated and these were introduced immediately,” it said in its statement.

Tell us your NDIS story

No system is 100 per cent secure, but the Signal app can be used to protect your identity by using end-to-end encryption. Please read the terms and conditions of the app to work out if it is the best method of communication for you.

Afford also confirmed that the NDIS Quality and Safeguards Commission had launched an investigation into Merna’s death.

“Afford has cooperated with the investigation but received no information about its status,” it said.

The New South Wales Coroner is yet to determine whether an inquest will be held.

Tanya Petrus is concerned Afford’s rapid growth has come at the expense of client safety.

“We’re trusting our kids to go to this organisation, and have faith in them,” she said.

“I think their major goal is to expand the organisation.”

Growing profits ‘our reason for being’

Afford is not just one of Australia’s biggest disability charities – it is also among the oldest.

The organisation was founded in 1951 as the Australian Poliomyelitis Society, a charity supporting Australians affected by the polio outbreak which was then gripping the world.

It became Australian Foundation for Disability – shortened to Afford – in 1967, and for decades funded its services in the same way as most disability charities: through donations and state government grants.

The rollout of the NDIS brought a new wave of cash to the sector, and with it a fundamental shift in how disability service providers fund their services.

Under the NDIS, people with disabilities are allocated funding based on their needs and can shop around for services. The NDIS has dramatically changed how disability organisations such as Afford operate.(

Like many other big providers, Afford now views its clients as “customers” and puts a big emphasis on increasing revenue.

ABC Investigations has obtained an almost 7,000-word internal document called The Afford Way, which sets out the charity’s mission and values.

“We know that in a competitive marketplace profit is the best way to measure whether we are providing a service that the community values,” it says.

“While sustainability is multi-faceted, the bottom line is that it requires profit. Afford believes in our organisation making a profit and maintaining a profitability focus.”

Nicole Rogerson from Autism Awareness Australia says such language was once seen as taboo in the non-profit sector, but has been gradually creeping in since the start of the NDIS rollout. Nicole Rogerson is concerned some disabilty organisations may be prioritising business growth over client care. (

“I hate to say it, but think there are an awful lot of service providers that are looking at their sales targets and financial reports well before they look at the outcomes for people with a disability.”

But Afford defended its use of the language and said it was a “profit for purpose” provider.

“This allows us to continue to expand, innovate, evolve and importantly invest in our broad range of services.”

Afford is juggling its ambitions for growth while managing the fallout of the resignation of its former chief executive officer.

Steven Herald, who presided over Afford’s growth over the past six years, stepped down in March.

But three days after notifying the board of his decision, Mr Herald tried to rescind his resignation. Steven Herald quit as Afford’s CEO in March before changing his mind. (

“You have not acknowledged my resignation and today I have been looking at my achievements in [the] last six years,” he wrote to Afford’s chairman Ross Fowler on March 22, three days after sending his resignation.

“I retract my resignation and hope we can look at the incredible trajectory I have delivered.”

After seeking legal advice, the board turned down his request.

Mr Herald declined to be interviewed and did not respond to questions about his time as CEO.

He was replaced with an interim CEO in May and the board has hired an executive recruitment agency to find an ongoing replacement.

‘They didn’t look after him properly,’ client’s mother says

“They didn’t look after him properly,” she said.

“I’m really disappointed in them. I gave them my trust and they didn’t do what I asked them to.”

Her son, Tom Stumpo, has Down syndrome and cannot eat solid food because he has no teeth. Rosa Stumpo had to call an ambulance for her son Tom after he was fed inappropriate food.(

Yet Ms Stumpo says her son was given a chicken sandwich to eat while staying at an Afford respite care home in June 2019.

“I got a call telling me that Tom’s got a virus,” she said.

“And I said, ‘Tom? He was perfectly all right when he left. But if you’re scared that he’s got a virus, bring him back.'”

When Tom arrived home, Ms Stumpo discovered he was not sick at all — the food had become stuck in his throat.

“We ended up having to call the ambulance,” she said.

“I thought, I’m going to lose him. I was panicking that the ambulance wasn’t coming quick enough.”

Tom was taken to Concord Hospital in Sydney, where staff managed to remove the food.

Afford declined to comment on the specifics of Tom’s case, citing client confidentiality.

“However, in this matter we have acknowledged that an error occurred and have apologised to the family.”

Spending on social events not appropriate for a charity, advocate says

Afford also defended its corporate culture, which some staff have told the ABC has become dominated by social events and parties more appropriate for a private sector organisation. Afford spent $1,500 in a single night at a Gold Coast nightclub.(

According to The Afford Way, the nights are an integral part of the organisation’s culture.

“Buzz nights are a critical tool in human cohesiveness, and help smooth tensions in the team at a fun and neutral venue,” the document says.

In its statement, the organisation said: “Afford assigns a percentage of administrative costs towards training, development, team building and recognition programs for its staff.”

It said the credit card spending at the bar on the Gold Coast last year related to one of these “recognition programs”.

It is unclear whether the yacht trip on Sydney Harbour last month was a “buzz night” or another kind of staff event. The vessel Afford chartered cost more than $2,000 an hour, not including catering.(

“The event was an off-site event for senior managers, approved under previous management,” Afford said.

Nicole Rogerson from Autism Awareness Australia said such spending was not acceptable for a charity.

“I don’t think anybody would think that that kind of behaviour is appropriate in the leadership team of a disability organisation,” she said.

“The sad part about this story is it’s probably not an isolated incident. There probably are other organisations doing the same kind of thing.”

Take COVID-19 Vaccine or Else: Authorized Pitfalls for Employers