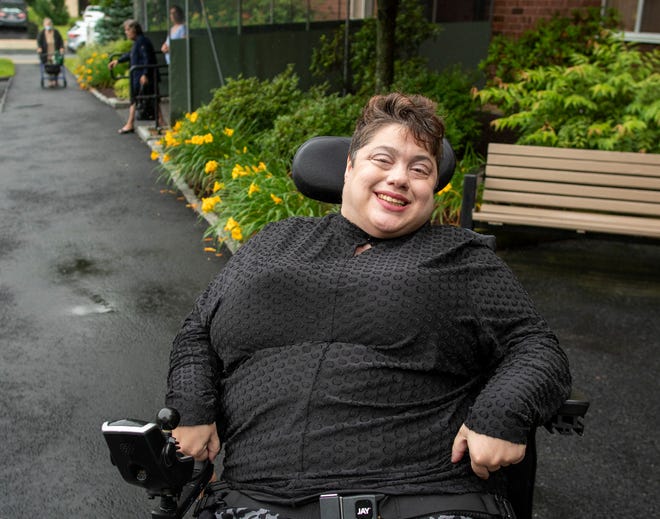 WORCESTER – Christina Parissi said she loves trees as much as any other city dweller and considers herself environmentally conscious.

But she also appreciates getting home from lunch without breaking her leg and having an ambulance ride.

Why do these have to be competing interests? Why does improvement or adaptation for one group have to be at the expense of another?

These ideas shaped the parallel discussions in the city council on Tuesday, where, interestingly, Parissi’s petitions for more awareness of the city’s sidewalks and streets were faced with separate petitions calling on the city to withdraw plans to remove healthy but intrusive street trees in order to make room for road improvements create.

Parissi lives on Chandler Street and uses a power wheelchair. One day last month she was returning from a meal at Scruffy Murphy’s when she came across a road construction site. She said she usually uses the street rather than the sidewalk because it’s actually smoother, safer, and more predictable than sidewalks that have been neglected and warped by tree roots.

But the construction site on Chandler Street that day led them to the sidewalk. In the Cumberland Farms area, she said she was looking forward at a section of tree-rooted sidewalk but overlooked an oncoming pothole and was thrown from her chair. She broke her leg and was taken to a local hospital by ambulance.

“The policeman and the road worker were great at the whole thing,” Parissi said in an interview last week. “I wish I had their names. I was really scared and nervous.”

Think about it for a second. A wheelchair user in the city would prefer to drive with traffic on one of the busiest streets because the sidewalk is actually a hairier endeavor.

“The streets are actually safer than the sidewalk,” said Parissi. “You avoid the tree roots and the bumps, and in some places you can’t get on the sidewalk or away. Roads are definitely the better way.”

Unfortunately, roots from street trees that raise the surrounding sidewalks are a major reason pedestrians impede safe travel. They not only warp the sidewalk, but also intervene in the width of the sidewalk in many places.

These issues have been cited by the city as part of a motivation to remove nearly 100 healthy street trees across the city, many of them in the Newton Square neighborhood. The city said the trees must go to meet the Americans With Disabilities Act’s standards for pavement and other road construction standards.

There comes this competing interest. Local residents, particularly on Newton Avenue North, have come together to call for a stop to the move. They urged the city to find another way, and on Tuesday, Kathleen Krieger of Southwood Road informed the city that she had done some research and suggested that there are certainly other ways to improve roads and sidewalks without to cut down the beloved trees of a neighborhood.

Krieger told the city council there was a lot of information on workarounds that could allow the city to meet ADA standards and keep the trees, and called for a more measured approach.

After a recent tree hearing, the moves have been put on hold while City Manager Edward M. Augustus Jr. makes a decision on the fate of the trees by city ordinance.

Parissi said she fully understood the tree advocates’ position and had spoken to them about the issues. She said she appreciated the efforts to find ways to save the trees and make the walkways ADA compliant, but fears that nothing will be done if those efforts are deemed too difficult or too expensive.

As part of Tuesday’s session, the tree and sidewalk petitions took a back seat to the annual review of Augustus’ performance as chief executive of the city, which occupied most of the evening. But Augustus said in his remarks that the two petitions are a good example of the difficulties faced by the city administration.

“(Parissi) spoke about the challenge she was facing, the accident she had while trying to move her wheelchair on a sidewalk that was partially at risk because trees were growing through the sidewalk,” said Augustus. “Fast forward to the callers who said, ‘Don’t cut these trees.’ ”

Augustus said the challenge to the city government stems from the adage of politics as the “art of the possible”. It’s not about perfect solutions, but about being able to achieve something.

“That’s what we’re doing here all day trying to figure out what’s possible,” said Augustus. “What can we afford? What do we have the political support for? What is the majority of city councils ready for? What does the community want to do?”

Kind knowledge on violence in opposition to disabled women, ladies…

Arc Clayton to have fun anniversary of ADA laws | Information

Mother and father Wait Or Drive Throughout State For Autism Remedy

Covid-19: Take a relook at masks for the disabled, Bombay HC…

The white cane: from my adversary to my ally | Blogs