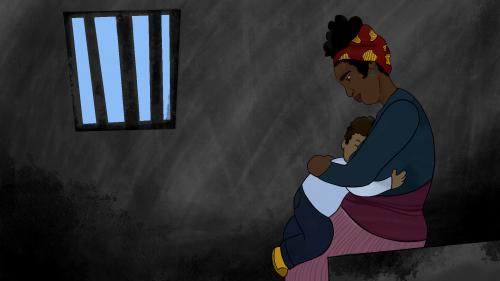 The 128-page report, “’Why do you want to make me suffer again?’ The Impact of Persecuting Abortion in Ecuador “ documents how these laws are having far-reaching harmful effects in Ecuador, killing lives in increased maternal mortality and morbidity, cutting off basic services for women and girls, and undermining broader efforts to promote sexual and reproductive health. Women and girls charged with abortion are often violated of their rights to medical confidentiality and due process, and face significant barriers to accessing quality legal representation. Prosecution affects not only women who want to terminate an unwanted pregnancy, but also those who experience miscarriages or obstetric emergencies or who urgently need follow-up care after an abortion.

“The criminalization of abortion not only undermines women and girls’ access to essential reproductive health services, it also exacerbates inequalities and discrimination,” said Ximena Casas, women’s rights researcher at Human Rights Watch. “Ecuador should lift all criminal sanctions for consensual abortions. It should at least ensure effective access to abortion for all legal reasons and stop prosecuting women and girls who seek basic medical care. “

Consensual abortion is a crime in Ecuador, punishable by up to two years in prison for women who consent to an abortion and one to three years for health care providers who perform an abortion. Exceptions only apply in the event of danger to the life and health of the pregnant woman and in all cases of rape.

On April 28, 2021, the Ecuadorian Constitutional Court issued a ruling decriminalizing abortion in all cases of rape pregnancy. A previous law only allowed such abortions if the person had a mental disability. The court ordered the ombudsman to draft and submit a bill to the legislature within two months to comply with the ruling and asked the National Assembly to debate the bill within six months of its introduction. Leaving the door open to further decriminalization, the court concluded that the National Assembly has an obligation to enact laws that enforce a “right to live in dignity” and cannot shirk its responsibility to protect all constitutional rights .

On June 28, 2021, the Ombudsman submitted a new law to the National Assembly according to the decision of the court. The bill was drawn up as part of a national dialogue with feminist groups and recognizes the right to abortion in all cases of rape in accordance with international human rights standards.

Human Rights Watch investigated 148 cases between 2009 and 2019 of women or girls, health care providers or companions, who were charged with procuring or facilitating an abortion. 81 percent of the cases were against women and girls, a disproportionate number of them in provinces where a large part of the population was indigenous or Afro-descended. Most were young – 12 percent were girls – and almost all of them lived in poverty.

In one case, a 20-year-old Afro-Ecuadorian woman was hospitalized after falling down stairs while working. At the hospital, she learned that she was pregnant and had a miscarriage. She was arrested and charged with having an abortion and spent four months in custody with her three-year-old son. She was found not guilty in the trial.

Human Rights Watch has found that people of Ecuador face many barriers to accessing legal abortion and post-abortion. These include criminal prosecution, stigma, ill-treatment by health professionals, and a narrow interpretation of the exception that allows abortion to protect the health and life of the person.

Defendants who have been convicted typically serve a suspended sentence, often with demands for community service or psychotherapy, especially for women under the age of 25.

Two women and a girl were charged with manslaughter following an obstetric emergency. The 15-year-old girl was raped on her way home from school. She was sentenced to five years in prison after giving birth alone in the bathroom of her home and the baby died. She spent four years and three months in a youth facility.

Women and girls suspected of having performed abortions have also faced violations of their rights to medical confidentiality and due process, and have struggled to obtain quality legal representation. 73 percent of the cases examined were initiated after a health care provider reported a patient to the police in breach of medical confidentiality. In 99 of the investigated cases, police interrogated women in hospital, in violation of national law, in the absence of a lawyer, while they were experiencing or recovering from a medical emergency, sometimes life-threatening.

These interrogations also endangered her health by interrupting her treatment and affecting her medical care and relationship with her doctor. Judicial behavior and decisions often reflected gender stereotypes and religious considerations. In several cases, women were sentenced to community service in orphanages or to therapy aimed at making them good mothers.

Part of the stigma and discrimination stems from violations of the right to full, clear, accessible and updated information on reproductive health and health care. In many cases, the woman had taken misoprostol, a drug with various gynecological purposes, including to induce an abortion, with little information or understanding about what the drug is or how it would affect her.

Many defendants said they used it as a method of contraception or to “regulate irregular menstruation”. This is not surprising given the lack of comprehensive sex education in Ecuador’s schools. Ecuador has a historically fragmented approach to sex education linked to government efforts to curb teenage pregnancies.

“Ecuador’s government must guarantee access to full sexual and reproductive health services,” said Casas. “Newly appointed lawmakers and President Guillermo Lasso have the opportunity to end cruel politics and join countries around the world reforming their laws to facilitate access to abortion, in line with their human rights obligations and the recent Constitutional Court ruling . “

UVI Govt Director of Middle for Excellence in Improvement…

What You Want To Know About The Honest Housing Act

A brand new instructional problem: How does a baby’s mind work?

‘Particular measures for polls, however why not for vaccination?’

Perlman and Raskin converse on disability advocacy – The Ahead

What I want my firm did in another way