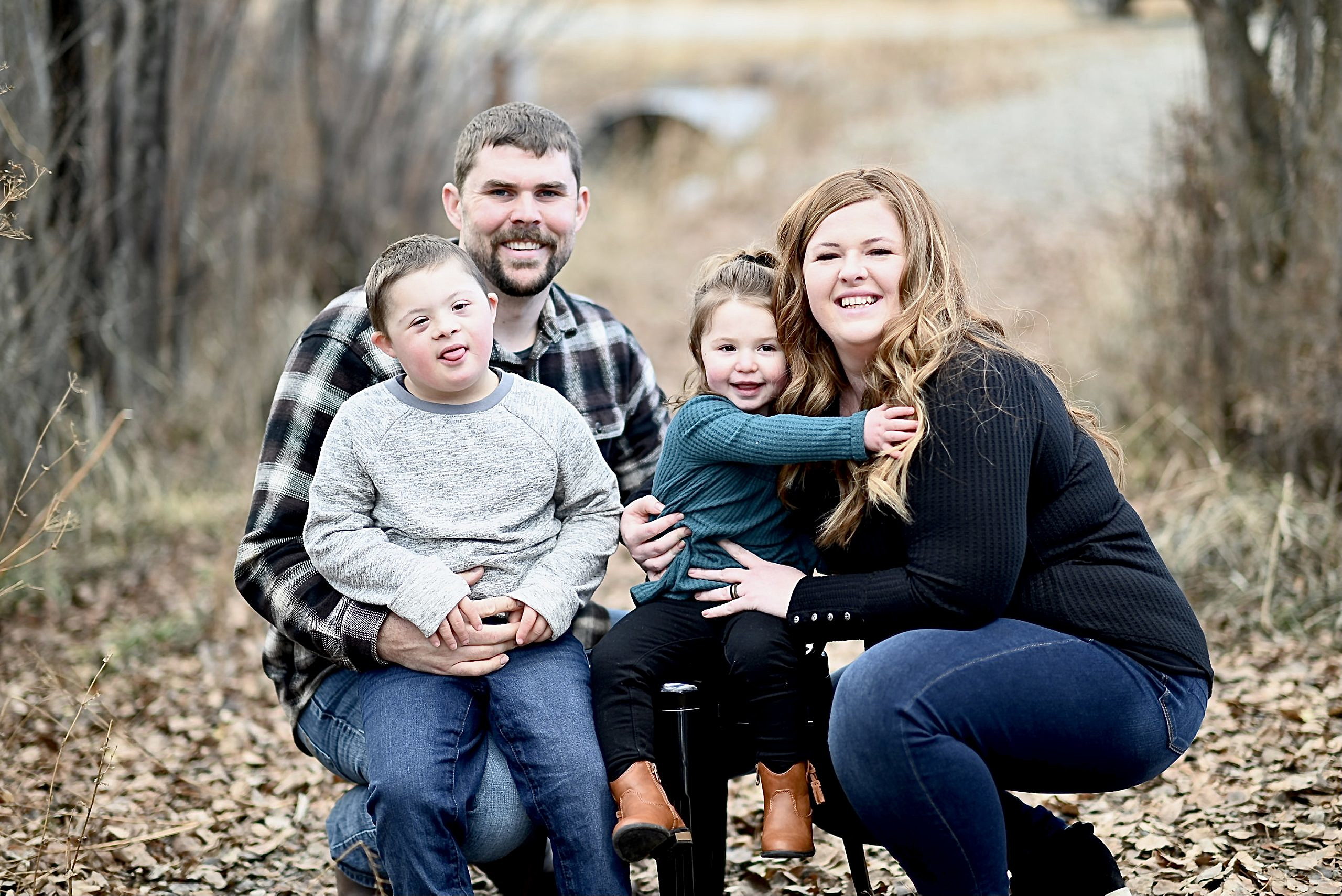 On February 8, a bill nicknamed “Griffin’s Law” passed the Montana Senate 49-0. The bill is named after Griffin Dalrymple (left), whose mother Jayci (right) campaigned for laws that would ban doctors to refuse an organ transplant solely because of a patient’s disability. (Charli Chapman)

(KHN) Griffin Dalrymple is an energetic 7 year old who loves going to school in Eureka, Montana. Two years ago, the boy, referred to as a “fireball” by his mother Jayci, was suddenly knocked back by severe bacterial pneumonia that took him to the hospital for two weeks.

When her son was in intensive care with a tube in his lungs, Jayci began to imagine worst-case scenarios. She feared that if Griffin needed a lung transplant, he could be turned down because he has Down syndrome.

“It was terrifying to know that they could deny him certain life-saving services,” she said.

In the United States, it is common to deny organ transplants to people with mental and neurodevelopmental disorders such as Down syndrome or autism, although it is illegal to do so under American Disability Law.

According to a frequently cited 2008 study, 44% of organ transplant centers said they did not place a child with some neurodevelopmental disorder on their organ transplant list. 85 percent might consider disability a factor in deciding whether to list the person.

After Griffin recovered, Jayci brought the issue to Montana lawmakers’ attention. Largely because of their campaigns, the state is considering a bill prohibiting doctors from refusing an organ transplant solely on the basis of a patient’s disability. Last month, nicknamed “Griffin’s Law,” the Montana Senate passed the bill 50-0.

Although Montana doesn’t have its own transplant centers, proponents hope this bill and others who like it will bring attention to the problem and pressure doctors to investigate why they are making certain decisions. Andrés Gallegos, chairman of the National Disability Council, hopes that such legislation will “change hearts so that people understand that they are discriminatory”.

If the bill passed through the State House and signed by the governor, Montana would be the 17th state to prohibit such discrimination. Seven other states and the federal government have similar bills pending, although some experts question whether such laws are enforceable enough to eradicate discrimination.

With more than 100,000 people waiting for organs across the country and an average waiting list of three to five years for some organs, doctors often have to make heartbreaking decisions about which patients are likely to benefit the most.

According to a 2019 report by the NCD, many doctors and organ transplant centers fear that patients with mental or neurodevelopmental disorders are more likely to have concurrent conditions that would make transplant dangerous, or that these patients’ quality of life is unlikely to improve with transplant. Others believe these patients may not be able to meet post-transplant requirements, such as taking immunosuppressive drugs.

However, the report, which searched research and medical reports, found that none of these concerns are generally applicable. Disabled patients can benefit just as much as any other patient, according to NCD, an independent federal agency.

“If a decision is made not to include a person on the list just because that person has a disability, that is obvious discrimination,” said Gallegos.

Many mentally challenged patients and their families have seen this firsthand. When Joe Eitl was born with a congenital heart defect in 1983, his mother, Peg, was told that Joe would never be a candidate for a new heart because of his Down syndrome. When his heart failed in 2019, eight hospitals refused to even consider a transplant for Joe, who lives in Philadelphia with his mother.

Peg Eitl admitted that Joe’s case was difficult because he previously had reconstructive heart surgery that would make a transplant difficult. She advocated transplant centers for more than a year and even considered suing them. Last October, Vanderbilt University approved the procedure. Joe came home on February 10th and is recovering.

“I think my biggest frustration was the emphasis placed on someone with special needs,” said Peg Eitl. “It pains me that they are classified as less than and not as worthy.”

Stanford University bioethicist David Magnus, who authored the 2008 study on the extent of transplant discrimination, said people like Peg Eitl shouldn’t have to prove that Joe would benefit from a transplant. Because people with disabilities are a protected class in the United States, he said, “The burden is on people who want to discriminate.”

In practice, however, this does not appear to be the case. In September Magnus published a follow-up survey of more than 300 transplant programs. Of these, 71% said they would automatically disqualify an adult with an IQ below 35, which is considered a severe intellectual disability, while 12% would disqualify a child at this level. Only about 20% of the facilities had formal guidelines for pediatric patients.

Magnus suspects these numbers are low because some doctors may be unwilling to admit discrimination. He has not yet investigated whether new state laws have affected doctors’ likelihood of discriminating against disabled patients.

But Magnus doubts that laws like Montana’s bill will be enforceable. Part of determining a patient’s eligibility for a transplant is whether he or a caretaker can meet post-transplant requirements, such as reminders to take immunosuppressive drugs. If a person with a disability cannot meet these criteria, that person may not be a good candidate.

“All of these are terribly difficult judgments,” said Magnus.

Transplant surgeons need to maximize the limited supply of organs and ensure that they survive on the patients who receive them. If not, “it takes an organ from someone who could have benefited,” said Dr. Marwan Abouljoud, President of the American Society of Transplant Surgeons.

Abouljoud said institutions have different standards for weighing the importance of intellectual disability when making a transplant decision. Ideally, the committee that determines whether or not to list someone for a transplant will include social workers and behavioral psychologists and program leaders who can find ways to help the person comply.

On February 12, the Society of Transplant Surgeons adopted a new statement supporting non-discrimination and encouraging transplant centers to find ways to support these patients. “We will ask the states to adopt local guidelines on this,” Abouljoud said.

Sam Crane, legal director of the Autistic Self Advocacy Network, which has drafted model laws passed by several states, said some bills – including that of Montana – address concerns about post-transplant care. They prohibit transplant centers from basing their decision solely on a person’s ability to meet post-transplant requirements and require an investigation into sources of support to help the patient achieve compliance.

But Crane said doctors could still find an excuse to avoid adding a disabled person to the transplant list if they believe that a person without a disability would benefit more from receiving an organ.

“It is very difficult to prove discrimination in such a situation,” she said.

Although a similar anti-discrimination law has been passed in the US House of Representatives, proponents prefer to focus on state laws, according to Crane. Organizations like the Autism Group have argued that the ADA and other federal laws already prohibit this type of discrimination, making federal legislation unnecessary. Gallegos added that states can also enact stricter requirements than the federal government and adapt them to their specific medical systems.

Under state law, patients can seek an injunction or an injunction in local courts. These hearings can be done quickly so a judge can decide whether to force a facility to add a person to the transplant list.

Jayci Dalrymple hopes Griffin’s Law will get that speed. “If you need to stop discrimination, run the clock,” she said.

Invoice would give US vets of 1966 Spain bomb accident advantages

Patton State Hospital to vaccinate all sufferers towards COVID-19…

Concrete vs. asphalt on freeway on-ramps; when does Caltrans go for…

Why I Gave My Mosaic Embryo a Likelihood