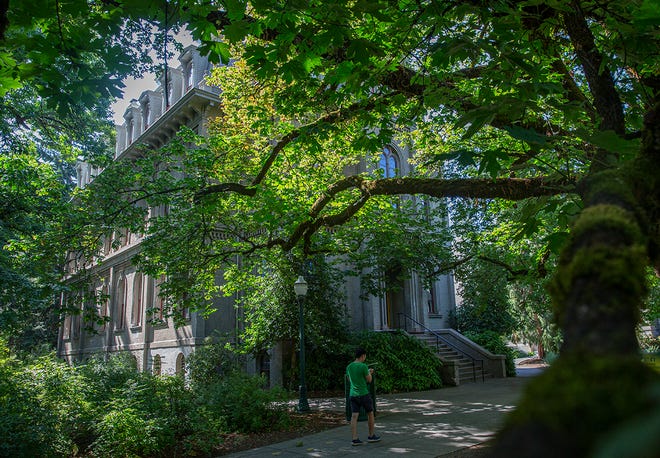 Two historic foundation buildings on the University of Oregon campus will receive a facelift this legislature with new funding provided by state lawmakers.

University Hall (formerly Deady Hall) and Villard Hall are the two founding buildings of UO and are more than 150 years old, according to an announcement on the UO website. Together, these two halls form one of 17 Oregon National Historic Landmarks.

Due to her age, UO requested the state fund to renovate the halls to meet the standards of the Americans with Disabilities Act, improve heating and cooling systems, and make them earthquake-proof and more modern.

“The UO applied for $ 58.5 million to renovate the University Hall and Villard Hall, the two founding buildings of the university. These buildings are listed as National Historic Landmarks and we are grateful that the state has approved funding for these renovations and funding to cover bond issues, ”said UO spokesman Kay Jarvis. “The total projected cost of the project is $ 64.35 million. The funding model for this project requires the university to provide at least 10% of the state contribution. The University’s contribution to the Heritage Renovation Project is $ 5.85 million. “

These two buildings are notorious among UO students and faculty for being antiquated. University Hall, for example, has no elevator.

Two faculty members testified the need for upgrades in letters to lawmakers.

“As a professor who ‘lived’ and taught extensively in the university hall, I am very familiar with the need for renovation of this building,” wrote Hal Sadofsky, Dean of the Faculty of Science.

He mentioned the “large temperature fluctuations” and the lack of energy efficiency caused by an outdated heating system and no cooling.

“We teach and work in the summer too, and I’ve seen sensitive students leave the third-floor classrooms in the spring and summer when temperatures on this floor rose to the 1990s,” he wrote. “A faculty member came into his office a few years ago and found that his whiteboard had broken due to the high temperature.”

Other issues Sadofsky identified were the lack of accessibility for all students and the need for earthquake, fire, and safety improvements.

“Funding this project would make these life-saving renovations possible and ensure that future generations can experience the birthplace of public higher education in Oregon,” he wrote.

Theresa May, associate professor and head of the graduate school for theater arts, has also submitted a letter calling on lawmakers to fund the project.

“Our students deserve to learn, grow and improve their acting skills in an accessible, safe facility,” May wrote. “Like the University Hall, Villard Hall is not currently open to all students. The doors are insufficient in height and width to allow access to the ADA lobby areas. “

Villard Hall hosts the UO’s theatrical arts program, and May noted that the program hopes to return to personal performances in the near future and, without renovation, this would invite them to “attend performances in a severely seismic building.”

“As an actress, I’m adept at creating illusions, but it’s difficult to stifle disbelief in a room that is dangerous to our faculty, staff, and students,” May wrote.

Construction is slated to begin in early 2023 and projects are slated to be completed by the end of 2024, Jarvis said. It is planned to renovate both buildings at the same time, but this is not yet planned in detail.

“Our current plan is to find temporary accommodation in both buildings for all activities,” she said. “The goal of every project on campus is to minimize the disruption associated with every construction project.”

Folks With IDD Are Serving to Suppliers Enhance The Vaccination…

The battle to get and preserve employment when you’ve a…

Australia’s Covid vaccine rollout has begun, so how is it…

Leaving nobody behind with Fiqh for particular person with…

#No Filter: Terminating an Worker for Social Media Posts –…