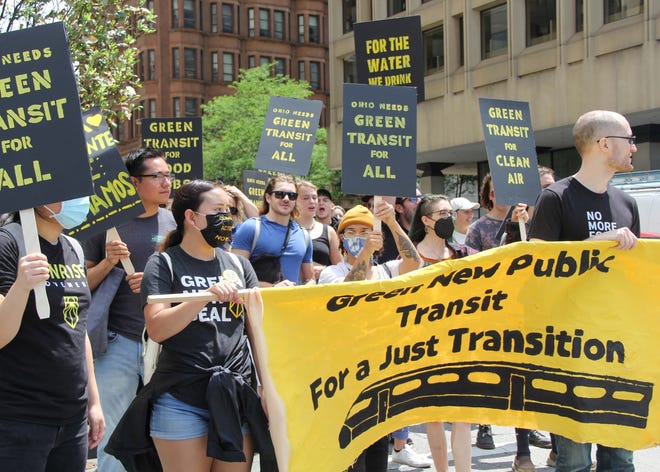 While dozens of cars hummed along the downtown High Street, around 60 people gathered at the Ohio Statehouse on Saturday afternoon to demonstrate, march, sing, and sing, and advocate for more accessible and environmentally friendly public transportation in the city and state to use.

Organized by the Columbus Hub of the Sunrise Movement, the “Columbus Rally for Public Transit and a Green Future” began and ended at the Statehouse with a march to Battelle Riverfront Park and the US Sen. Sherrod Brown’s downtown office in between.

Chants of “What do we want? Transit! When do we want it? Now!” and “Find buses, not bezos” echoed through the quiet city streets.

Saturday was largely an effort by the local Sunrise movement to push for Brown’s support for the Stronger Communities Through Better Transit Bill proposed by US MP Hank Johnson, D-Georgia, in early June.

Loayza said she wanted Brown to support stronger communities through better transportation because she believes public transportation is part of the solution to the climate change puzzle.

“People don’t always see the connection between public transport and climate change,” she said in an interview. “It would make a huge difference to make sure we switch to electric or environmentally friendly modes of transport.”

Loayza is a sophomore at Ohio State University in New Albany, but she was born in Lima, Peru.

She joined the Sunrise Movement in early 2020 because climate change is a topic close to her. She worries about Peru, a country that she said could be hit hard by climate change.

The weekend demonstration was also the culmination of a public transportation campaign that the Sunrise Movement Hubs in Ohio have been working on for several months, Loayza said.

“We got a big win a few months ago,” said Loayza.

For the local Sunrise movement, it was a win in the form of legislation.

Brown, along with US Senator Tammy Duckworth, D-Illinois, and US Senator Bob Casey, D-Pennsylvania, tabled a bill that would provide $ 10 billion in grants over 10 years to provide public transportation Making Americans with Disabilities accessible to ADA) standards.

“Who went here today because it was the only option?” Abou-Ghalioum asked everyone who had gathered in front of the statehouse. Several people raised their hands.

But Patricia Fly, who lives on the West Side, didn’t raise hers. Fly was one of the first to come to the rally – by bus. She said she relied heavily on the Central Ohio Transit Authority (COTA) buses to get around Columbus.

“Free public transport would be helpful for the working class and poor people,” Fly said in an interview.

She said she also wanted COTA to be done more frequently and made available to a wider population so that central Ohio could reduce carbon emissions.

“People don’t have to worry about finding a car or taking a Lyft or something to get around town,” Fly said.

Municipal insurance policies, codes have to be ADA-compliant | Op-Eds

Municipal insurance policies, codes have to be ADA-compliant |…

How COVID-19 has impacted Nigerians with disabilities | Coronavirus…

You and the legislation | ADA nightmare for business property house…